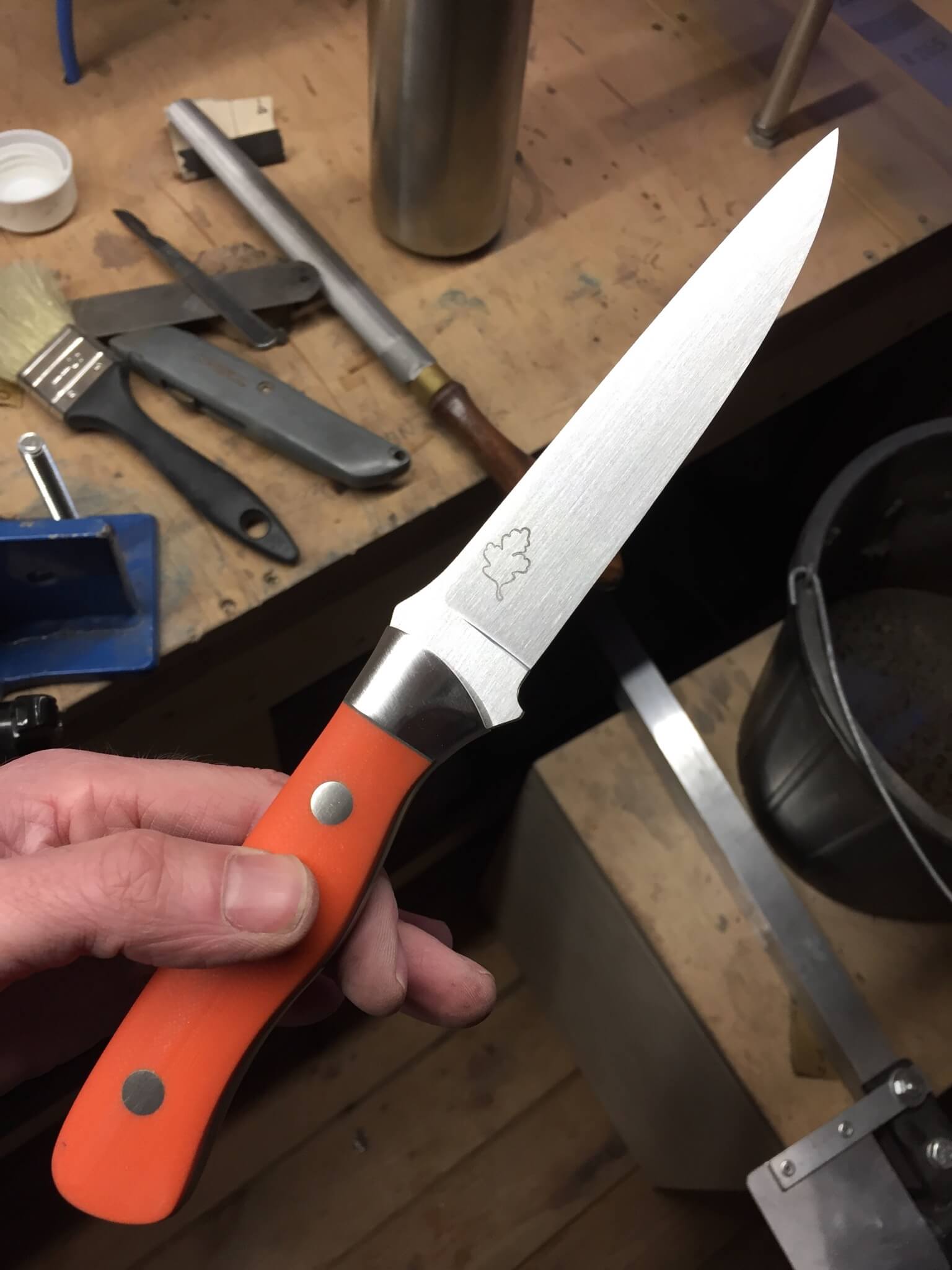 The unusual production journey of a bespoke custom Knife.

Artwork has always been a facination to me. The creation of something unique that is pleasing to the eye with more to enjoy the more you study it. The process of creativity combined with skill and talent to produce something both beautiful and perfect in it’s form.

The journey started with an instagram post from Phil Siddell of Wellington Blade Works. An offer of a custom knife in return for an introduction to Deer Stalking. I took a quick look at his portfolio online and decided there was a good trade to be had and made contact. Keen to make it worthwhile I offered Phil a coaching session to get comfortable and competent behind a deer caliber rifle followed by a stalk on Roe or Sika with an opportunity to further his knowledge on one of my Deer Stalking Certificate 1 courses. I was pleased when he took me up on the offer and the planning commenced.

We put a date in the diary for a visit to Dorset along with discussing the finer details of the day and I shared my concept of a stalking knife.

I have always stalked with a shorter bladed knife for gralloching in the field. There is not much that a 3 inch mora can’t do but one thing is getting a good bleed on a large species of deer. I decided I wanted to cover all the bases so we settled on a 5 inch blade. Having stalked with various designs of knife in the past the importance of being able to clean blood and fat deposits without any ingress into permeable materials or hard to clean gaps was also important. For the handle, stabilised wood was tempting but I decided to go for G10, a high pressure fiberglass laminate material. Equally, the sheath needed to be easy to clean to avoid it turning into a heath hazard of its own.

The date for Phil’s visit was in late November. Rain threatened and on the day the poncho shelter was deployed. The format for the coaching session was to get the basics right, applying the 4 marksmanship principles, building various shooting positions for successful results with a .22 rimfire before moving to centerfire and finishing with a mock Deer Stalking Certificate 1 marksmanship assessment. Phil, being a competent air rifle shot picked it all up quickly and adjusted well to managing the recoil of the steyr mannlicher in .308 and I was more than happy for him to progress on to live quarry.

Once warmed up again with a hot lunch we were ready to contemplate an evening outing to a high seat to wait for a Sika. On arrival the rain had subsided but despite it being ideal conditions in a good spot they did not make an appearance. We retreated to make a new plan for the following morning but the weather did not look great with wind and rain forecast. The pressure was on and the odds against us but you can’t shoot anything by staying at home so we wrapped up and headed out before first light. I described the plan to Phil. This time in search of a Roe doe we were to stalk along a hillside into the wind with various sheltered spots in dead ground where, with any luck we would find deer in the ley of the wind. As the light came up the rain also moved on. Not wanting to bump any deer I picked our way carefully along the hillside glassing new ground as it came into view. We had covered more ground than I thought we would need to by now and the sun had started to rise which brought with it some warmth. As we reached the bottom of a large re-entrant, looking up I spotted some movement on the other side which to my relief I confirmed to be two roe, a young buck and maiden doe. At a distance of over 200 meters I had to close the gap for Phil so after making a quick plan we skirted back and up the hill in some dead ground hidden from view before crawling over the rise of ground on our belt buckles directly opposite where we had seen the deer. They were still there, now at just over 100 meters, I positioned the rifle on the bipod and beckoned to Phil to crawl in behind it. Once Phil was comfortable with a good sight picture we studied the deer for some time as they fed. Eventually, the doe turned broadside and with a word of confirmation from me, Phil released the shot.

The doe lept and made a dash behind a hedgeline out of view. The buzz I get from guiding new stalkers onto their first deer can’t easily be described. Having prepared a new stalker as much as possible with the skills for success and shared that build up of tentative expectation until the critical moment of taking the shot arrives, hoping that they will apply thier marksmanship priciples, composure, breathing, squeeze not snatch. There is so much that can contribute to the success of a hunt and nothing is ever guaranteed. The questioning look from Phil was a familiar one and I encouraged him that his shot had met it’s mark. The shared feeling of elation as the focus breaks and we can relax. I explained the reaction to shot and why I was certain we would find the doe not far from where she disappeared from view. We sat and watched the buck move off and a Doe and kid futher up the hill on the edge of some gorse for a while before deciding to go and follow up the shot deer.

Design drawings for the custom knife went back and forth over the course of a month with Phil sugguesting features and the values of various component parts such as whether to use a bolster at the hilt of the blade as part the handle, handle bolts or a lanyard hole. Whilst these were all choices I had to make I also had strong opinions on the overall shape and appearance of the knife. A gentle concave curvature along the spine from base of handle to point of the blade. A stop to prevent ones hand from slipping onto the blade when in use. For the sheath I wanted to keep the traditional look of leather and integrate a cleanable liner. Once I had an agreed concept in draft form Phil sent some knife template models of it in perspex which were very useful to confirm the shape and dimensions of the knife in the hand and we decided to proceed to steel.

A Blaze orange G10 handle was quite a difficult desision. I love the look of a burled and knotted piece of wood and on something hand crafted it felt slightly wrong, yet when it arrived I knew I had made the right desision. It looked professional and fit for purpose, the glass fibers giving a textured look and the olive green liner between handle and steel tang emphasising the perfect symmetry of the handle. We developed a good leather prototype sheath with a removeable liner that lent itself very well to clipping onto a pocket or the inside of a boot whilst using the knife but in the end we decided on a hand stitched traditional leather dangler sheath for normal carrying and Kydex as the washable alternative.

As we approached the shot site I talked Phil through the follow up. We found the paint and pins which confirmed a good heart/lung shot and followed the short trail to the final resting place of the doe some 30 meters from where it was shot. I gave Phil a moment to collect his thoughts. It is all so easy to become slightly detached from the reality of what we do as hunters and another benifit of coaching new stalkers I find is that it helps me continue to reflect on the responsibility placed on us to take only what is nessassary to promote a heathy and sustainable population and to be humane in doing so. A mixture of emotions is a good sign of a conscientious hunter but I could see the satisfaction too and as it was important to Phil that he eats what he shoots I was very pleased that he now had something to take home with him.

To say I was pleased with the knife was an understatement and when it is also a tool you can use regularly I feel the appreciation of artistic talent and craftsmanship is enjoyed so much more and the first Deer Central Stalker is a knife I will treasure.

In partnership with Wellington Blade Works we are making the Deer Central Stalker available for you to own with some customisable features.

You can view more information and the detailed specifications of the knife at the following link where you can also apply for a quote,

Category: Product Reviews
Tags: Custom Knife, Deer Stalking, Deer stalking certificate
Leave a Reply Cancel reply
Select the fields to be shown. Others will be hidden. Drag and drop to rearrange the order.
Click outside to hide the compare bar
Compare